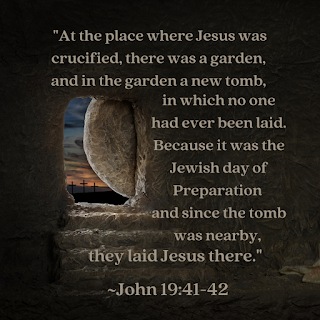 “Later, Joseph of Arimathea asked Pilate for the body of Jesus. Now Joseph was a disciple of Jesus, but secretly because he feared the Jewish leaders. With Pilate’s permission, he came and took the body away. He was accompanied by Nicodemus, the man who earlier had visited Jesus at night. Nicodemus brought a mixture of myrrh and aloes, about seventy-five pounds. Taking Jesus’ body, the two of them wrapped it, with the spices, in strips of linen. This was in accordance with Jewish burial customs. At the place where Jesus was crucified, there was a garden, and in the garden a new tomb, in which no one had ever been laid. Because it was the Jewish day of Preparation and since the tomb was nearby, they laid Jesus there.”

When I read these passages of Scripture, I see deep grief. Did Mary remember how, when Jesus was just a baby, she was told that a sword would pierce her own soul? Was Joseph of Arimathea ashamed that he had allowed his fear of the Jewish leaders to keep him a secret follower? Were the women inconsolable as they watched and waited? When Nicodemus brought enough myrrh and aloe fit for a king's burial, did he mourn his choice to meet Jesus at night instead of sitting at His feet in the light of day?

In Luke’s account, we are told that the women obeyed the command to rest on the Sabbath rather than continue with burial traditions immediately, choosing to worship and obey even when every one of them surely struggled with the most profound grief they had ever experienced. Because Jesus was the Messiah; He was God's Annointed Deliverer. How could they not grieve bitterly when Jesus died?

From our point in history, we know that God raised Jesus from the dead. We know that we need not grieve as those who have no hope. Joseph, Nicodemus, Mary, and the other women did not have that blessed assurance yet.

When I am deeply grieving and suffering loss, do I continue to act in faith? Do I still obey God when I do not understand? Or does a hard road tempt me to pull away from God? I know that these disciples of Jesus had their deepest grief turn to their greatest joy; will I choose to faithfully walk, trusting that God will provide a way for me?